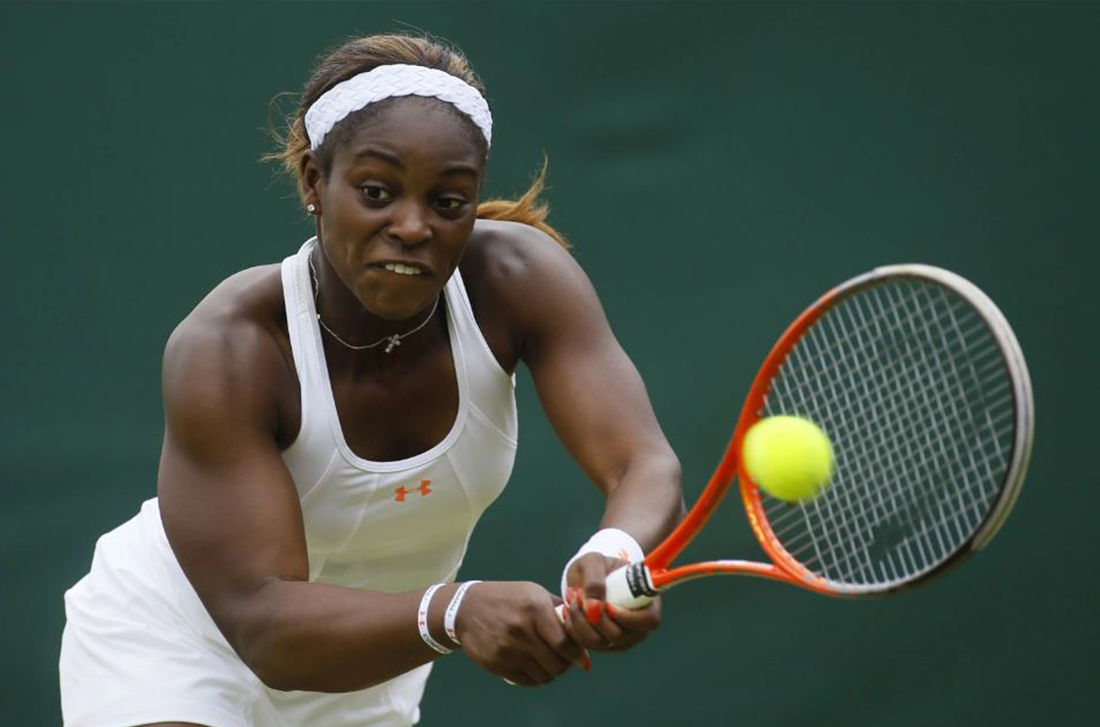 Posted at 00:32h in News by The Sloane Stephens Foundation

The time is coming — if it hasn’t arrived already — when Sloane Stephens will be forced to drop the swirly heart she affixes to her name when she signs autographs.

The number of adoring fans clamoring for her signature simply will be too great, demanding expediency over art.

But there she was Friday morning on the fissured courts of Prince George’s Community College, where she had just held a clinic with roughly 100 youngsters of varying ability, wielding a Sharpie as purposefully as she wields her racket, looping the final “e” of “Sloane” into a heart on every tennis ball she autographed.

At 20, Stephens is the fastest rising star in American tennis. This week, she brings her career-high No. 15 ranking and luminous personality to Washington’s Citi Open, her first tournament since reaching Wimbledon’s quarterfinals earlier this month.

With a blistering forehand and exceptional on-court quickness, Stephens boasts the gene pool of a can’t-miss pro athlete, daughter of a former NFL running back and an all-American college swimmer. And her arrival in the top ranks of the sport has been embraced in a country that has long lamented its lack of budding tennis champions.

But Stephens is neither a cookie-cutter replica of her parents nor the next Serena Williams, as often portrayed. And she’s far from a finished product, still learning to close matches against seasoned competitors and to calibrate her candor in a way that’s true to herself without rankling others.
“I’m my own person,” Stephens said, sporting fingernails the color of orange traffic cones that matched the laces of her lime-green sneakers. “Some of the things I’ve accomplished have been amazing, but I still have a ways to go. A long ways to go.”

Stephens is among a handful of promising young Americans that includes 18-year-old Madison Keys, 21-year-old Christina McHale and 17-year-old Taylor Townsend. All are entered in the Citi Open’s women’s tournament.

“The talk has been so negative for so long that we don’t have any good up-and-coming players,” Stephens said. “But now we’re at a point where we’re getting results and everyone is doing well and pretty consistent.”

Stephens, however, has separated from the pack this season, particularly on the big stages, reaching the fourth round or better at all three majors to date, each on a different surface.

She stunned Williams to reach the Australian Open semifinals. After making the fourth-round on the French Open’s red clay, she went one round better at Wimbledon, falling to eventual champion Marion Bartoli.

With Stephens serving a must-hold game at 5-6 in the opening set, the proceedings were halted more than two hours by rain. When play resumed, Stephens’s serve and focus were gone.

“Delays are always tricky,” Stephens said. “I had never been in a delay like that — in the quarterfinals of a Grand Slam, playing on grass. Next time I’ll handle it better.”

The Citi Open, which gets underway Monday at William H.G. FitzGerald Tennis Center in Rock Creek Park, marks the start of Stephens’s preparation for the U.S. Open.

“Her strengths are big and obvious: She has got easy power off her serve and forehand, and is a lover of the grand stage,” former pro and frequent commentator Mary Carillo said. “Her personality is like her game. She comes straight at you even though at times it can get her in hot water, in matches and in between them.”

It was at the 2009 U.S. Open, where she was competing as a junior, that Stephens received the news that her father, John Stephens, who played five seasons for the New England Patriots, had been killed in a car crash. She had only gotten to know him as a young teen; her parents divorced years earlier. After consulting with her mother, Sybil Smith, a psychologist and former Boston University swimmer, Stephens left New York to attend his funeral in Louisiana, then returned to the tournament.

“It’s just something that happens in life, and you’ve kind of got to go with it,” Stephens said. “My family has been ultra-supportive. I’m thankful for that. They’ve helped me get through a lot.”

Stephens didn’t start playing tennis until age 9 but showed such early promise that she switched to home-schooling at 12. As she climbed the junior rankings, agents and corporate sponsors vied for her rights.

“The way she carried herself was so mature, so genuine and so humble,” recalled Nic Askew, who met 13-year-old Stephens when he was a young coach with the Prince George’s County Tennis and Education Foundation. “She had such charisma and an aura about her that drove everyone toward her.”

Baltimore-based Under Armour signed her in 2010 even though tennis gear wasn’t significant to its bottom line. What mattered more was that Stephens fit its ethos as “the brand of the next generation.”

“We couldn’t be happier with her progress,” Matt Mirchin, the company’s head of sports and brand marketing, said of Stephens. “We’re becoming more of a global brand. And when Sloane played Serena in the round of 16 [in Australia], it was basically a two-hour Under Armour commercial.”

Stephens delights in the growth of her Twitter followers (@sloanetweets), approaching 60,000. But she made more news than she intended in an interview with ESPN the Magazine in which she characterized Williams as cold and unfeeling — comments she later said were incorrectly portrayed.

It’s a topic she no longer wishes to discuss.

The spotlight of Grand Slam stages is a world away from Prince George’s Community College, where the faded green asphalt of the eight courts is riddled with cracks and ankle-high weeds. Stephens chose the complex for a major refurbishment funded by American Express and the U.S. Tennis Association after taking an interest in the county’s Tennis and Education Foundation.

Askew, the coach she had at 13, had brought several students to watch her compete against the Washington Kastles and at the U.S. Open. But last year, when the group couldn’t raise the funds for the trip to New York, Stephens underwrote their $3,000 expenses.

On Friday she stood on their home turf, where a long line of children, scaled-down rackets in hand, waited for a chance to hit with their favorite player.

“You know how to play?” Stephens asked the first little girl. “Lemme see!”

And she tapped an oversized orange-and-yellow ball so it landed perfectly waist-high.

Up next was a boy named Anthony, whose prowess caught Stephens off guard.

“Oh, Anthony has a full swing! Anthony has had lessons before!” she extolled. “That was a slice! I like it!”

And so it went, until each child had taken a turn, shared a hug and gotten an autograph.